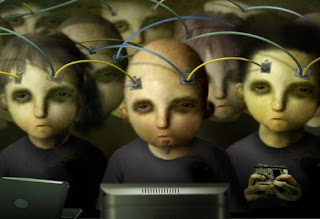 Recent events in our nation have baffled those of the conservative stripe; none more so than the decisions made by our fellow Americans this past November. The reelection of Barack Obama, seemingly trailing in the polls up to the last days, was the most frustrating; but there were others that were even more disturbing. For the first time, voters in several states endorsed laws permitting homosexual marriage while others approved the recreational use of marijuana.

The reelection of President Obama in the face of high unemployment, low housing values and general economic misery can perhaps be explained away as another triumph for the cult of popularity, but what of the rest? How to explain these abrupt turnabouts in the attitudes of Americans? Has the electorate really and truly taken a turn to the left; and if so, why? One answer may lie in cyberspace.

At the advent of the Internet age, we thought that this new medium would be an ideal venue from which to promote conservatism, to shout our message from the virtual rooftops, unimpeded by the constraints of liberal editors and the rest of the mainstream media establishment. And for a while, we were right. From sites like Newsbusters.org that pioneered the documentation of media bias, to forums like FreeRepublic.com where thousands of posters formed pajama patrols always on the lookout for leftwing mischief, the Internet has indeed been a powerful tool for advancing conservatism. Read more...
Posted by Economic Analyst at Thursday, January 10, 2013