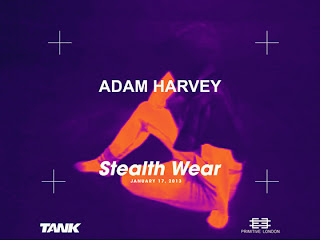 In early 2012 the U.S. Congress authorized the FAA Air Transportation Modernization and Safety Improvement Act. Within this bill is a provision calling for the deployment of some 30,000 robotic drones over the skies of America by 2015, arguably the boldest overt domestic surveillance initiative to have ever been introduced in the land of the free. With an average of some 600 drones allocated per state, this future network of highly advanced surveillance systems promises to give law enforcement, military and intelligence assets unprecedented video and audio access into the lives of every single American.

But whenever government attempts to institute a ban on contraband items, or pass draconian laws, or introduce new tracking and surveillance methods, rebellious elements within the target populace rapidly develop counter-strategies and technologies to marginalize the threat.

Artist and fashion designer Adam Harvey, who objects to the authoritarian nature of the global surveillance state, has done just that.

In an effort to  counter the high-tech integrated drone surveillance systems soon to be fused into intelligence networks across the country, Harvey and a group of partners have developed a line of clothing dubbed Stealth Wear. Read more...
Posted by Economic Analyst at Saturday, January 12, 2013