Patriot Dawn – The Resistance Rises: “The Government of the United States of America Was No Longer an ‘Administration’; It Was A Totalitarian Regime.” 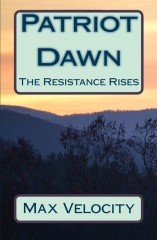 The following excerpt appears in the new book Patriot Dawn – The Resistance Rises, by Max Velocity. Max has served in both, the British and the U.S. armies, and also as a high threat security contractor. He has served on six military operational deployments, including to Afghanistan immediately post-9/11, and additionally he spent five years serving as a security contractor in both Iraq and Afghanistan. During his career in the British Army he served with British SOF (The Parachute Regiment), to include a role training and selecting recruits for the Regiment. More recently, he has served in a Combat Medic and Civil Affairs role in the US Army Reserves. He is the author of two previous books: Contact! A Tactical Manual for Post Collapse Survival  and Rapid Fire! Tactics for High Threat, Protection and Combat Operations.

His latest book, Patriot Dawn – The Resistance Rises, is a step away from the user friendly tactical manuals he is known for, and combines the excitement of an action-packed fictional novel with real-world battle hardened experience in offensive, defensive and counter-insurgency strategies and tactics.

The United States has descended into Civil War. The storm was rising for some time, a Resistance in the hearts of American Patriots to the strangulation of liberty by creeping authoritarianism. The scene was set. It just took a little push.

A terrorist attack on the United States leads to war with Iran, followed by collapse, as the economy goes over the cliff. The final blow is a widespread opportunistic Chinese cyber attack, taking down the North American Power Grid. Read more...
Posted by Economic Analyst at Saturday, January 12, 2013