Hungary on the Brink of Disaster 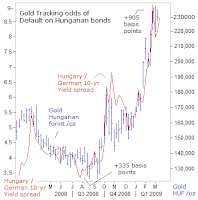 BUDAPEST – If anyone wonders how bad the economic crisis is in Europe, consider this: While shooting a story in Budapest, last week we parked our vehicle on a street in a part of town that has fallen on hard times.

Our translator, Andras Krucsai, suggested we not stray too far from the car. But it was broad daylight. And we weren’t headed far enough away to lose sight of the vehicle.

Still, within no more than three minutes, vandals struck, seemingly out of nowhere. In a blur, two teenagers broke the glass and grabbed our GPS navigational device, which was sure to fetch good money on the black market. They'd disappeared by the time we ran the distance – around 300 yards – screaming all the way back.

''I saw them clearly,'' said Andras, who owned the car, brushing glass shards from the front seat. ''Just kids, 16 or 17, but you know it's gonna happen more and more often. It's gonna be worse and worse.''

Eastern Europe’s shining light
Pal Serge, 38, would agree. We met him at a busy subway station on Moscow Square, in downtown Budapest, standing in near-freezing cold with a couple of dozen other unemployed men. They were looking for any kind of day labor.

Serge, a forklift driver, had recently returned from a bus trip to England. He couldn't find work there either. ''I think if it continues like this much longer, you'll see anger, even violence, in the streets,'' he said.

Not long ago, Hungary was Eastern Europe's shining light, the one former Communist nation that was destined to catch up to its richer, Western European neighbors. Hungarians were egged on by their government to consume with abandon – to buy that new foreign car or take out a low-interest home mortgage, in euros, while resting assured that German or Austrian banks would guarantee the loans.

Similar thinking was used to justify tens of millions of euros in generous subsidies to pensioners, families with children, and the unemployed. After all, Europe wouldn't turn a cold shoulder on a country that was on a fast track into the Eurozone, that club of 19 countries that use the euro as the national currency.

So Hungary spent, and the European Union covered the bulging deficit – until, that is, the financial crisis struck like a perfect storm. Today, Hungary is the EU's most indebted member.

Now on the ‘brink of ruin’
''It went on a spending spree and a borrowing spree when times were good and now Hungary is really on the edge of insolvency," said British economist and historian Niall Ferguson. ''It's a little bit like a Latin American economy. It's spent itself to the brink of ruin.''

As the economic crisis evolved, the Western European banks ran out of credit and Hungary's currency, the forint, crashed, effectively tripling those euro car and home loans. And suddenly construction workers like 25-year-old Shandar Barnoi, who had only known the steady climb of prosperity, were hit by two crises – Hungary's and Europe's.

''I have no idea what happened,'' Barnoi said. ''All I know is that I haven't found any work for weeks and it's getting harder on my family.''

Drive down any street in Budapest and you'll see boarded-up shops, peeling paint and "For Sale" signs. We came across one new, unsold high-rise development that was standing right next to an abandoned site, now just a foundation of concrete and protruding steel rods, all flooded in sewer water and debris. It could have been a metaphor for what's become of Hungary's middle-class dreams.

Inflation has driven produce prices up so high that it's cheaper to import Turkish or Moroccan fruit and vegetables. And what about beef, that key ingredient in Hungarian goulash?

Many Hungarians who took out those euro-based mortgages – like truck driver Ishtvan Hatosh – have had to cut back on meat and other products in a desperate attempt to hold onto their homes.

The International Monetary Fund has already lent the country $16 billion in emergency funds. Also, Thursday's announcement at the G-20 Conference of $1 trillion in additional funding for the IMF could make a difference for emerging economies like Hungary's, but it will take months, or more, for any new loans to be approved. And Hungary will eventually have to pay them all back.

Meanwhile, those once rich EU banks in Germany and Austria now have their own empty pockets to deal with – they aren't likely to return to the old days of bailouts and spending bubbles anytime soon.

''Unfortunately this is a very unpleasant problem that almost certainly has to get worse before it gets better," said William Browder, CEO of Hermitage Funds and an expert in Central and Eastern Europe investment.

But not all is gloom and doom in what was once the heart of an empire. Some Hungarian analysts, like the Open Society Institute's Kristof Varga, believe there's a silver lining in this crisis if politicians can find the courage to reform Hungary's deficit spending, no matter how painful that is. He thinks that this could be a moment of truth.

''Economists have been saying we need to cut back for years, that we should reform the system because it's going to crash. Well now it's crashed. So there's no argument anymore that we don't do this, because we have to,'' he said.

‘Never really a dream’
Still, most Hungarians just laughed when we asked if they could afford more cutbacks.

"Janos Kadar [the former Communist header] was better for us,'' said Hatosh, the truck driver, sitting on a tiny bed inside his 200 square foot studio apartment, the one he's struggling to keep. ''People were happier. Calmer. The situation was much better back then.''

Perhaps Andras, our translator, best summed-up the frustration that people here are feeling.

''It was never really a dream for us in Hungary. Even in the good times we were always promised that things would get better, in two or three years. Now we're in about the fifth ‘two or three years.’ We never seem to get there.''
Link
Posted by Economic Analyst at Sunday, April 05, 2009