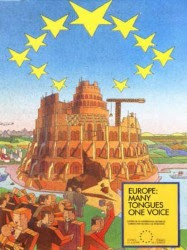 The American Dream
Are we about to see a huge push for a "United States of Europe"? As the sovereign debt crisis in Europe continues to spiral out of control, suddenly this term is popping up in the and in major newspapers all over Europe. So is this by accident? Surely not, the truth is that there is an overwhelming consensus among the political and financial elite of Europe that a "United States of Europe" is what would be best for the Eurozone. However, they are likely going to need a massive financial crisis in order to reach their goal. Right now, the citizens of the countries that make up the Eurozone are overwhelmingly against deeper European integration. Without experiencing a massive amount of financial pain, they are unlikely to change their minds any time soon. So who is going to win in the end?

This would entail a loss of sovereignty not seen in those countries since many were under the jackboot of the Third Reich 70 years ago. For be in no doubt what fiscal union means: it is one economic policy, one taxation system, one social security system, one debt, one economy, one finance minister. And all of the above would be German.

Right now, the EU is a terribly undemocratic institution. Individual voters have next to no power over the control freaks that run things in Brussels. Every single day, the EU becomes a little bit more like the former USSR. The last thing that the people of Europe need to do is to give the EU more power. But that is exactly what the elite of Europe want. They want a "United States of Europe". And they may just be willing to allow a massive financial crisis to happen in order to get it.
More Here..
Posted by Economic Analyst at Wednesday, September 21, 2011