Obama to Legalize Illegal Immigration by Decree; Will Add 800,000 Voters In November 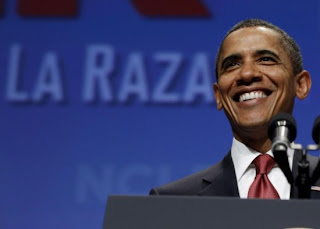 In the midst of the worst economic crisis since the Great Depression in which millions of Americans have lost jobs we can expect even more competition in the employment marketplace.

According to AP sources, President Obama will speak today about a new administration policy that will grant immunity from deportation for some 800,000 immigrants who have entered the country illegally.

The Obama administration will stop deporting and begin granting work permits to younger illegal immigrants who came to the U.S. as children and have since led law-abiding lives. The election-year initiative addresses a top priority of an influential Latino electorate that has been vocal in its opposition to administration deportation policies.

The policy change, described to The Associated Press by two senior administration officials, will affect as many as 800,000 immigrants who have lived in fear of deportation. Read more.....
Posted by Economic Analyst at Saturday, June 16, 2012