Did Rand Paul Sell Out To The Jews? 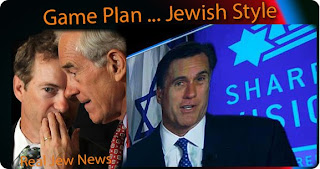 A HUGE LEADERSHIP VACUUM now exists ever since Rand Paul announced his endorsement of Mitt Romney during an appearance on Fox News’ ‘Hannity’ on June 7, 2012.
Many are asking, “Do Rand Paul and Mitt Romney make strange bedfellows?”

For if Rand Paul claims that he is carrying the torch of his father’s legacy then how can he jump in bed with Romney who supports the NDAA, stricter gun control, bank bailouts, global wars for the Jews, and ObamaCare?

Observers of the Ron Paul campaign are maintaining that Rand Paul does not make a move before consulting his father and thus suggesting that Ron Paul was party to his son’s decision.

But some Libertarian insiders like Lew Rockwell argue that Rand Paul is his “own man”—that he is not a libertarian after all—and that by endorsing Romney he acted without his father’s consent.

Whatever the case may be, Lew Rockwell made it clear that the Ron Paul campaign was “over” and that it’s now time to “move beyond politics.”

And as regards Ron Paul making a deal to create a libertarian-oriented Republican platform, Rockwell suggests that strategies and game plans are “not fully in reality.”

And besides, platforms and party directions, just like campaign promises, are built upon shifting sands if not downright lies. Read more.....
Posted by Economic Analyst at Friday, July 06, 2012