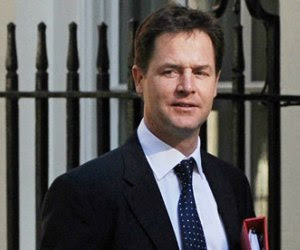 As part of the global push to tax the rich, Britain is now debating an “emergency” wealth tax. But the idea has hit fierce opposition from conservatives, who say the “politics of envy” hasn’t made the country rich.

Deputy Prime Minster Nick Clegg, leader of the Liberal-Democrat Party, has proposed a one-time tax on the wealth (rather than the incomes) of high-net-worth Britons. The details aren’t clear, but Clegg says the country is facing an economic war caused by a prolonged recession, and needs to tax the rich in order to avoid social unrest.

He told the Guardian that unless the country “hardwired fairness” into the budget, “I don't think the process will be either socially or politically sustainable or acceptable."

Chancellor George Osborne shot back, saying the plan would chase out the rich and make the odds of full recovery even worse. Bernard Jenkin, the chair of the House of Commons' public administration committee, told the BBC that the tax could strangle the golden geese of Britain. “If the politics of envy made a country rich, we'd be very rich … Most rich people are contributing far more in tax than other people." (Read more: How 'Lynching' the Rich May Hurt Stocks)

Britain has already hiked taxes on the rich to 50 percent but amid a weak economy and reports of wealth flight, the tax was ratcheted down in April to 45 percent. Read more....