Egypt prof: Israel will be gone by next year 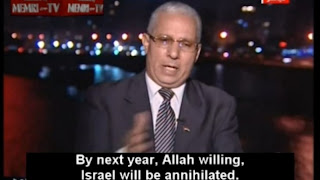 An Egyptian political science professor told an Iranian TV station that, with Allah’s help, “Israel will be annihilated” by 2013.

In an interview with Iran’s state-run Arabic news channel Al-Alam last week, Professor Gamal Zahran, head of the political science department at Egypt’s Port Said University and a former Independent MP, said: “Jerusalem is at the heart of the Palestinian cause, and the Palestinian cause is the cause of all Arabs and Muslims. The elimination of the Zionist entity is beyond debate, and the only question has to do with the circumstances.”

Zahran added that “the Arab revolutions, which broke out in Tunisia, Egypt, Libya, and Yemen – as well as in Bahrain and elsewhere – generate the people’s hope that one day, Jerusalem and Palestine will return to them.”

The interviewer interjected: “Why keep it only as a hope? Why not act on it? Read more.....