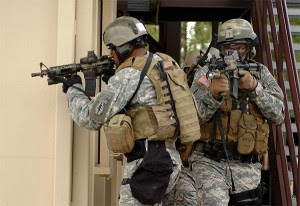 The US government has been scheming on how to provide for continuity of government for many decades now. According to Peter Santilli, an informant who is an ex-marine and worked on portions the contingency plans known as Rex 84, civil unrest will come after a financial collapse.

The Readiness Exercise 1984, a.k.a. Rex 84, outlines continuity of government wherein the US Constitution is suspended, martial law is declared and the US military command take over state and local governments in order to ensure stabilization of our nation at any cost. Any American who is deemed a “national security threat” would be detained in an interment or FEMA camp.

Rex 84 is the plan; the triggers are a series of executive orders . It is the continuity of government under specific contingency strategies that are laid out in various operations guide manuals. Operation Garden Plot is a subprogram of Rex 84.

Twice before, Rex 84 was implemented – during the LA riots and on 9/11. In these scenarios, only small portions of the entire set of documents were used. Within the series of contingency plans, implementation of them depends on the severity of the situation. Read more.....
Posted by Economic Analyst at Wednesday, August 01, 2012