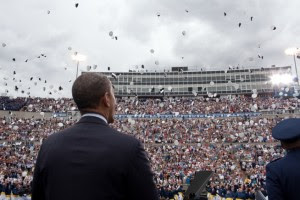 Under Barack Obama, the U.S. economy has performed worse than it did under any other president since the end of the Great Depression. After every other recession since World War II, the U.S. economy always regained what was lost and got even stronger before the next recession began. During this "economic recovery", we have not even come close to getting back to where we were in 2008. In fact, the number of Americans living in poverty and the number of Americans that are dependent on the government both continue to explode even as Barack Obama runs up trillions of dollars of new debt. Anyone that believes that Barack Obama is going to "fix the economy" if he is given another four years in the White House has taken way too many sips of the Obama kool-aid. The truth is that Barack Obama is not going to save you. Barack Obama has royally messed up our economy (along with a lot of other things) and that is not something we should be thanking him for.

Yes, Barack Obama is not solely responsible for the economy. In fact, he does not even have the most influence over the direction of the economy.

However, if he had been willing or able to actually do what was necessary to fix the economy, he certainly had ample opportunity.

For example, the Democrats had full control of Congress during Obama's first two years in office.

They were in a position to push through just about anything that they wanted to.

But just about everything that did get through Congress during those two years was full of really, really bad ideas. Read more.......