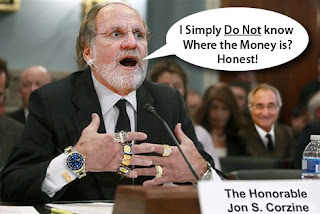 It is impossible to make up a fantasy tale that rivals the manifestations of the outlandish MF Global scandal. The evaporation of customer’s monies into an intentional off shore stash is tragic enough, but the indignity of allowing "no consequences" for a horrific crime against all investors is inexcusable. Jon S. Corzine is a fraudster that screams out for the gallows of justice. The manner of fleecing the public by Wall Street crooks has a clear distinction. Corzine walks while Madoff serves time. The original "Magical Mystery Tour" was a precursor of today's reality TV shows. Corzine’s version is more a "House of Horrors".
The lack of definitive disclosure in the MF Global investigation is hampered at every turn. The stonewalling and cover-up is business as usual in the world of special selective prosecution. The frustration shows as Judicial Watch sues SEC, CFTC for Corzine, MF Global docs.

The American people deserve to know the truth about what FSOC officials knew about the epic failure of MF Global and when they knew it. But once again, the Obama administration refuses to provide basic information related to its 'oversight' of the private sector," stated Judicial Watch President Tom Fitton."

Judging from public polls the attitude towards this dramatic crime hits hard at the diminutive confidence level, which goes a long way to cloud the entire financial community. If MF Global is an aberration, what is the problem of conducting an open and thorough probe that holds the thieves that stole customer’s money accountable?
The public deserves answers. The Daily Finance illustrates this sentiment in the article, MF Global: The Hero, the Villain, and the Anticlimax. Read more......