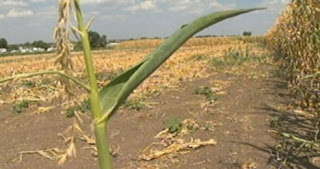 The largest natural disaster in American history just went from bad to worse.

Sweltering heat and persistent drought across the country has ravaged crops to such extremes this summer that tens of thousands of farmers and ranchers are on the verge of financial ruin. The situation is so dire that it has prompted the US Department of Agriculture to declare more than half of America a disaster area.

…more than half of all U.S. counties – 1,584 in 32 states – have been designated primary disaster areas this growing season, the vast majority of them mired in a drought that’s considered the worst in decades.