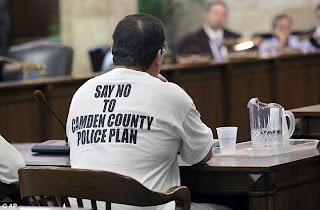 While the stock market in the US continues to surge (if not so much in China where the composite is back to 2009 lows) as the relentless liquidity tsunami makes its way into stocks, and other Fed frontrunning instruments, and only there, reality for everyone else refuses to wait. Last week we saw reality striking in Greece, where a section of Athens literally shut down after it ran out of all cash. Today, reality comes to the US, and specifically its poorest city, Camden, which is a twofer, doubling down also as America's deadliest city. It turns out Camden is about to become even deadliest-er, as its police force is set to be disbanded following a budget crisis in this effectively insolvent city.

This city, long among the nation's poorest and most crime-ridden, is on the verge of dismantling its police department and starting anew with a force run by the county government.

City officials are making the move to increase the number of officers while keeping the cost the same by averting rules negotiated with a union that city officials have seen as unwilling to compromise.

Unless the union - which is skeptical of the stated motivations for the change - reaches a deal with the county, no more than 49 per cent of the city's current officers could join the new force and those that do will get pay cuts.

John Wilson, a 57-year-old unemployed baker who's lived in the city his whole life, thinks it's worth a try. Read more....
Posted by Economic Analyst at Monday, September 24, 2012