Forget Free Speech Zones: “Take Him to That Pen Over There” 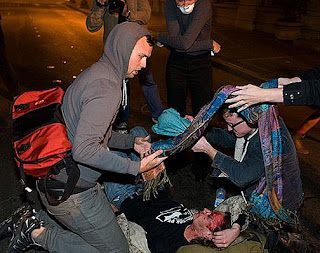 Make no mistake. We are living in an authoritarian police state.

Consider how local law enforcement agencies around the country respond when a group of individuals assembles to petition the government for a redress of grievances. Whether they’re protesting the abdication of individual rights at a Tea Party gathering or the corruption of Wall Street elites at Occupy Protests, the right of the people to assemble is no longer viewed as a Constitutional protection, but rather, a nuisance akin to a swine stampede.

Whether you agree with those who protest one abuse or another, the fact is that if they have the authority to do it to those with ideologies opposed to yours, they can (and will) also do it to you.

In New York this week disillusioned Americans from all walks of like gathered for another year of protests against the corruption on Wall Street.

They were met with fierce resistance from the New York Police Department and were indiscriminately herded into detention cells eloquently described by one  of New York’s finest as “pens,” such as those reserved for livestock: Read more.....
Posted by Economic Analyst at Tuesday, September 25, 2012