The Plight of Young, Black Men Is Worse Than You Think 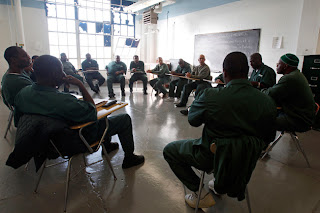 The U.S. has the highest incarceration rate of any wealthy nation, with about 2.3 million people behind bars at any given moment. (That’s 730 out of 100,000, vs. just 154 for England and Wales.) There are more people in U.S. prisons than are in the country’s active-duty military. That much is well known. What’s less known is that people who are incarcerated are excluded from most surveys by U.S. statistical agencies. Since young, black men are disproportionately likely to be in jail or prison, the exclusion of penal institutions from the statistics makes the jobs situation of young, black men look better than it really is.

That’s the point of a new book, Invisible Men: Mass Incarceration and the Myth of Black Progress, by Becky Pettit, a professor of sociology at the University of Washington. Pettit spoke on Thursday in a telephone press conference.

On the day Barack Obama was inaugurated in 2009, Pettit said, “there was hope that perhaps the U.S. was becoming a post-racial society.” But it wasn’t true then, and it’s not true now. The gap between blacks and whites remains wide in employment, income, wealth, and health. And as Bloomberg’s David J. Lynch reported earlier this month: “The nation’s first African-American president hasn’t done much for African-Americans.”

The unemployment rate and the employment-to-population ratio reported by the U.S. Bureau of Labor Statistics are based on a survey of households—people “who are not inmates of institutions (for example, penal and mental facilities and homes for the aged) and who are not on active duty in the Armed Forces.” Read more....
Posted by Economic Analyst at Saturday, September 29, 2012