U.S. Move to Give Egypt $450 Million in Aid Meets Resistance 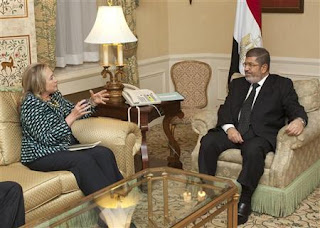 The Obama administration notified Congress on Friday that it would provide Egypt’s new government an emergency cash infusion of $450 million, but the aid immediately encountered resistance from a prominent lawmaker wary of foreign aid and Egypt’s new course under the leadership of the Muslim Brotherhood.

The aid is part of the $1 billion in assistance that the Obama administration has pledged to Egypt to bolster its transition to democracy after the overthrow last year of the former president, Hosni Mubarak. Its fate, however, was clouded by concerns over the new government’s policies and, more recently, the protests that damaged the American Embassy in Cairo.

The United States Agency for International Development notified Congress of the cash infusion on Friday morning during the pre-election recess, promptly igniting a smoldering debate over foreign aid and the administration’s handling of crises in the Islamic world.

An influential Republican lawmaker, Representative Kay Granger of Texas, immediately announced that she would use her position as chairwoman of the House appropriations subcommittee overseeing foreign aid to block the distribution of the money. She said the American relationship with Egypt “has never been under more scrutiny” than it is in the wake of the election of President Mohamed Morsi, a former leader of the Muslim Brotherhood. Read more....
Posted by Economic Analyst at Saturday, September 29, 2012