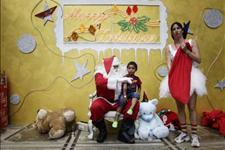 Charity—helping people who have trouble helping themselves—is a good thing two times over. It’s good for the beneficiary and good for the donor, too. Stephen Post's fine book, The Hidden Gifts of Helping, reveals that 76 percent of Americans say that helping others is what makes them most happy. Giving money makes us feel good, and helping face-to-face is even better. People say it makes them feel physically healthier. They sleep better.

Proof of the superiority of private over government efforts is everywhere. Catholic charities do a better job educating children than government—for much less money. New York City’s government left Central Park a dangerous mess. Then a private charity rescued it. But while charity is important, let’s not overlook something more important: Before we can help anyone, we first need something to give. Production precedes donation. Advocates of big government forget this.

We can’t give unless we (or someone) first creates. Yet wealth creators are encouraged to feel guilt. “Bill Gates, or any billionaire, for that matter,” Yaron Brook, author of Free Market Revolution and president of the Ayn Rand Institute, said on my TV show, “how did they become a billionaire? By creating a product or great service that benefits everybody. And we know it benefits us because we pay for it. We pay less than what it's worth to us. That's why we trade—we get more value than what we give up. So, our lives are better off. Bill Gates improved hundreds of millions of lives around the world. That's how he became a billionaire.” Read more....
Posted by Economic Analyst at Wednesday, December 26, 2012