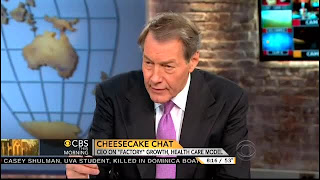 On Monday's CBS This Morning, Cheesecake Factory CEO David Overton spotlighted the looming economic impact of Obamacare's implementation, especially on small enterprises: "For those businesses that don't cover their employees, they'll be in for a very expensive situation." Overton also warned that the cost of the law would be passed on to customers.

Anchor Norah O'Donnell raised the issue of the still-controversial health care law: "One of the things that's going to change, of course, in the new year is ObamaCare, or the Affordable Care Act. How do you implement that at Cheesecake Factory, and how will you pay for health care for all of your employees?"

The restaurant chain executive pointed out that, unlike many businesses, The Cheesecake Factory is "already...paying a great deal in health care. So, we're not sure how much more it will be - or how much less - or what exactly we'll do. So, for us, it won't be as bad as it will be for others, which it will be very costly."

O'Donnell followed up by asking about the possibility increased prices for customers: "When you say it will be very costly, it will be passed on to who - the customers?" Overton confirmed that this would be the case: "Well, I believe most people will have to do that or cheapen their product." Read more....
Posted by Economic Analyst at Saturday, December 08, 2012