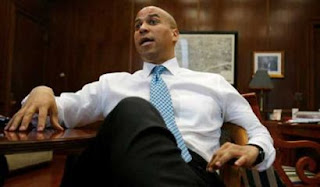 If someone writing for Black Agenda Radio says that Newark (NJ) Mayor Cory Booker is "worse" than Barack Obama, in part because Booker has "railed against wealth distribution" and "is ideologically committed to the privatization of  public education and to government that serves the rich," then Booker is probably not the total disaster we have come to expect of big-city Democrat mayors. Some Republicans were no doubt positively disposed toward Booker during the presidential campaign when the mayor criticized an Obama campaign ad that was demonizing Bain Capital.

A writer for the Care2 social action network that emphasizes "a healthy sustainable lifestyle and support(s) socially responsible causes" calls Booker a "superhero" for living in a housing project for eight years and cutting his own salary twice. (He also gets extra points from Care2 for being a vegetarian.)

But what is bringing out this week's plaudits for Booker from commentators throughout the liberal intelligentsia is his announcement, following a November conversation with a conservative on Twitter, that he is going to live on a food budget of $30, the equivalent of being on a food stamps program, for the next week.

Other politicians have participated in the "food stamp challenge," and I have no doubt that many of them are well-intended, as Booker's move may be. But I, for one, am unwilling and unable to judge a policy based on claimed good intentions of its supporters rather than on actual outcomes and compliance with modest philosophical and legal guidelines, such as our Constitution. Read more....
Posted by Economic Analyst at Saturday, December 08, 2012