Prepare for the Worst 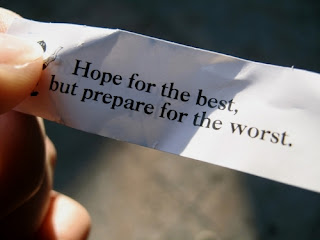 THE PUBLIC DEBATE over the “fiscal cliff,” the combination of automatic spending cuts and tax rate increases that our nation is about to careen into in 2013, started the same way Republicans always begin following an electoral setback: badly. John Boehner seemed to be negotiating with himself, and conservative pundit Bill Kristol suggested that raising taxes on millionaires “won’t kill the country,” as if that were the proper standard for fiscal policy.

When it comes to jobs—which are the most tangible outcome of government economic policy on actual human beings (remember us?)—the picture is grim. It is unlikely that any foreseeable solution to our short-term fiscal problems will be sufficient to spur the economic growth needed to return millions of unemployed Americans to work.

While the American entrepreneurial spirit will do its best to overcome a profligate government run by an economically ignorant president holding anti-liberty, anti-success, and therefore fundamentally anti-American motivations, the increased regulation passed under President Barack Obama will keep a wet blanket on growth, on business investment, and on our nation’s future.

The potential outcomes of the immediate fiscal cliff negotiations remain widely varied. The president and Senate Democrats have stated emphatically that they will not go along with any solution that does not raise the top marginal tax rate, though their target income threshhold remains unknown. John Boehner has seemed to say that he will not accept any increase in tax rates while suggesting that there are other ways to raise government revenue. Read more....
Posted by Economic Analyst at Thursday, December 13, 2012