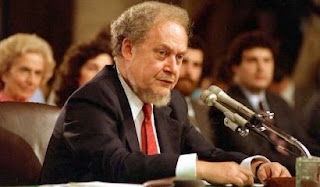 Robert Bork passed away yesterday at the age of 85.

A more decent man it would be hard to find.

That was, of course, not what was being said about him when President Reagan nominated him for the Supreme Court in July of 1987.

Famously — make that infamously — then-Massachusetts Senator Ted Kennedy took to the Senate floor and bellowed this:

Robert Bork’s America is a land in which women would be forced into back-alley abortions, blacks would sit at segregated lunch counters, rogue police could break down citizens’ doors in midnight raids, schoolchildren could not be taught about evolution, writers and artists would be censored at the whim of government, and the doors of the federal courts would be shut on the fingers of millions of citizens for whom the judiciary is often the only protector of the individual rights that are the heart of our democracy.

Were Robert Bork not a public figure the remark might have been slanderous.

It was slanderous, just not legally so.

At the time, I was a young member of Ronald Reagan’s political staff. And we, as with a good number of our colleagues spread out over the fiefdom that is a modern day White House, were charged with making the case for Judge Bork.

Erroneously, we assumed this would not be a difficult thing to do. Read more...
Posted by Economic Analyst at Friday, December 21, 2012