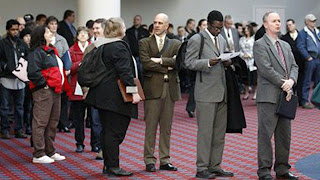 Unemployment Is Not Going Down

The mainstream media is heralding the decline of the official unemployment rate to 7.7 percent as evidence that the U.S. economy is improving.  But it is a giant lie.  The truth is that unemployment in America is not actually going down.  The percentage of working age Americans with a job actually dropped slightly in November.  During the last recession, the percentage of working age Americans with a job fell from about 63 percent to under 59 percent and it has stayed there for 39 months in a row.  In September 2009, during the depths of the last economic crisis, 58.7 percent of all working age Americans were employed.  In November 2012, 58.7 percentof all working age Americans were employed.  It is more then 3 years later, and we are in the exact same place!  So how in the world are they able to pretend that the “unemployment rate” is going down steadily?  Well, they get there by pretending that hundreds of thousands of unemployed workers “leave the labor force” each month.

According to the government, another 350,000 Americans left the labor force during November, and when you keep pretending that huge chunks of workers “disappear” each month it is easy to get the “unemployment rate” to go down.  But any idiot can see that there is something really funny about these numbers.  Barack Obama has been president for less than four years, and during that time the number of Americans “not in the labor force” has increased by nearly 8.5 million.  Something seems really “off” about that number, because during the entire decade of the 1980s the number of Americans “not in the labor force” only rose by about 2.5 million.  At this point the official unemployment rate is so manipulated that it is of very little value at all.

But the mainstream media is just eating up this “good news”.  They are very excited that the “unemployment rate” has fallen from its peak of 10.0 percent in October 2009 to 7.7 percent now…
Posted by Economic Analyst at Monday, December 10, 2012