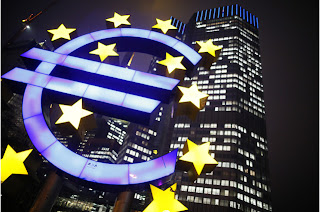 The European Central Bank said banks will next week repay more of its emergency three-year loans than economists forecast in another sign the euro region’s debt crisis is abating.

Some 278 financial institutions will return 137.2 billion euros ($184.4 billion) on Jan. 30, the first opportunity for early repayment of the initial three-year loan, the Frankfurt- based ECB said in a statement today. That compares with the median forecast of 84 billion euros in a Bloomberg News survey of economists. The ECB’s first loan totalled 489 billion euros and banks can continue to make early repayments in coming weeks.

“The ECB is taking back some of the extra liquidity it injected into the banking system a year ago,” said Christian Schulz, senior economist at Berenberg Bank in London. “This is a stark contrast to other central banks such as the U.S. Federal Reserve, the Bank of England and the Bank of Japan, who are still blowing up their balance sheets. No wonder that the euro exchange rate is going up.”

The ECB flooded financial markets with two tranches of so- called Longer Term Refinancing Operations totaling more than 1 trillion euros a year ago after banks stopped lending to each other because of Europe’s debt crisis. Banks have the option of repaying the loans, which were offered at the average of the ECB’s benchmark rate over their duration, after a year. Read more....
Posted by Economic Analyst at Friday, January 25, 2013