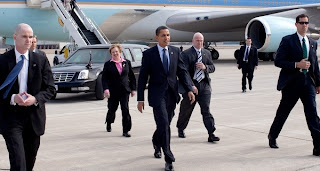 While simultaneously launching effort to disarm the American people

Despite launching a gun control agenda that threatens to disarm the American people, President Obama has signed a bill that would afford him armed Secret Service protection for life.

“The legislation, crafted by Republican Rep. Trey Gowdy of South Carolina, rolls back a mid-1990s law that imposed a 10-year limit on Secret Service protection for former presidents. Bush would have been the first former commander in chief affected,” reports Yahoo News.

The new bill, which will cost American taxpayers millions of dollars, is a re-instatement of a 1965 law which will see presidents protected for life as well as their children up to age 16.
The irony of Obama seeking to surround himself with armed men for the rest of his life while simultaneously working to disarm the American people via a gun control agenda that is likely to be enforced via executive decree represents the height of hypocrisy.

But it’s not the first time that Obama has lauded the notion of responsible Americans using firearms to protect himself and his family while concurrently eviscerating that very same right for the American people.
During an ABC Nightline interview broadcast on December 26 yet recorded before the Sandy Hook shooting, Obama said one of the benefits of his re-election was the ability “to have men with guns around at all times,” in order to protect his daughters. Read more...
Posted by Economic Analyst at Saturday, January 12, 2013