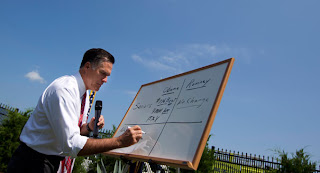 Mitt Romney and Paul Ryan say that they welcome a debate about the federal budget and their plans to reform Medicare.

But Republican strategists believe that there is really only one way to win the Medicare message wars: mount a bruising offense and attack Democrats for their own actions surrounding the popular federal health care program for senior citizens.

Historically, Republicans lose elections when entitlement reform becomes a central issue in campaigns. But interviews with several Republican strategists this week said that Democrats are far from bulletproof when it comes to this politically explosive terrain.

This year, GOP message-makers say the reduced Medicare spending provisions in President Barack Obama’s health care law give the Romney-Ryan ticket an unprecedented opportunity to gain the upper hand on the Medicare argument: by relentlessly slamming the president on the issue, then pivoting back to the economy. (Of course, Democrats are hitting Romney and Republicans just as hard back). Read more.....