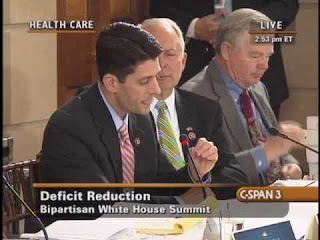 "I will not sign a plan that adds one dime to our deficits -- either now or in the future."
(Remarks by President Obama to a Joint Session of Congress, September 9, 2009)

The Majority Leader said the bill scores as reducing deficit by $131 billion over the next 10 years.

Now what do I mean when I say that?

First off, the bill has ten years of tax increases and ten years of Medicare cuts to pay for six years of spending. The true ten year cost when subsidies kick-in? $2.3 trillion.

The bill is full of gimmicks that more than erase the false claim of deficit reduction:

- $52 billion of savings is claimed by counting increased Social Security payroll revenues. These dollars are already claimed for future Social Security beneficiaries, and claiming to offset the cost of this bill either means were double-counting or were not going to pay Social Security benefits. Read more......
Posted by Economic Analyst at Saturday, August 11, 2012