In New York, defiant Ahmadinejad says Israel will be “eliminated” 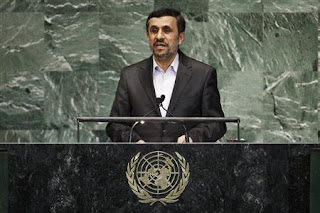 Iranian President Mahmoud Ahmadinejad said on Monday Israel has no roots in the Middle East and would be "eliminated," ignoring a U.N. warning to avoid incendiary rhetoric ahead of the annual General Assembly session.

Ahmadinejad also said he did not take seriously the threat that Israel could launch a military strike on Iran's nuclear facilities, denied sending arms to Syria, and alluded to Iran's threats to the life of British author Salman Rushdie.

Iran denies it is seeking nuclear arms and says its atomic work is peaceful and aimed at generating electricity.

"Fundamentally we do not take seriously the threats of the Zionists," Ahmadinejad, in New York for this week's U.N. General Assembly, told reporters. "We have all the defensive means at our disposal and we are ready to defend ourselves."

Ahmadinejad is due to speak at the U.N. General Assembly on Wednesday. U.N. Secretary-General Ban Ki-moon met Ahmadinejad on Sunday and warned him of the dangers of incendiary rhetoric in the Middle East. Read more.....